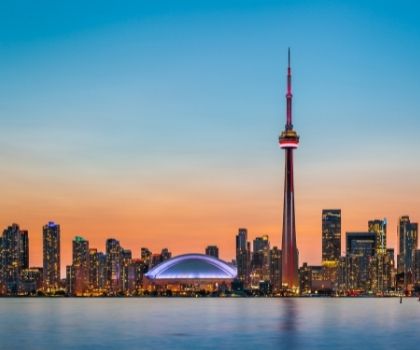 Toronto, the capital of Ontario is one of the largest and most populated Canadian cities along Lake Ontario's northwestern shore. Home to over 2.8 million residents, it is the fourth most populous city in North America. It is the anchor city of the Golden Horseshoe, a secondary region of southern Ontario lying at the western end of Lake Ontario.

If you're considering a move or relocation to Toronto, start here with all Toronto real estate listings both single-family homes and condominiums for sale. At Miracle Team, we want to help your relocation guide to your Toronto move. You can search throughout the Toronto area including all the distinct municipalities and regions in Southwest Ontario. Just below the first section of listings, you'll find a feature community tab with all of the cities, villages, and hamlets that we service, however, it's not just limited to these. Throughout the neighbourhoods, hundreds of communities, and villages in the Toronto area, we can help you by, sell, or invest in the right home for your needs and your budget.

Read on below the listings to learn more about relocating to Toronto Ontario.

Register for a free account to receive email alerts whenever a new Toronto condo or home comes on the market that matches your specific criteria.

$539,900
Neighbourhood: Rockcliffe-Smythe
38 Greendale Ave
Toronto, ON M6N4P6
3
Beds
1
Baths
2
Days on Site
W5774632
MLS
Freehold. Where Can You Find In Toronto A Price Such As This? Near Metrolinx Subway Line, Walk To Bus Stop, Near School And Parks, Access To Hwy 400 And 401. Near Shopping
West-100 Capital Realty Inc., Brokerage

$1,719,000
Neighbourhood: Danforth
326 Strathmore Blvd
Toronto, ON M4J1P8
3
Beds
2
Baths
2
Days on Site
E5774741
MLS
Location Location! The Same Owner For Over 50 Years! Ready For A New Family To Call Home! A Charming House That's Full Of Cherished Memories! A Ton Of Potential For Renovations And Updates! Eat In...
Right At Home Realty, Brokerage

Planning a move to Toronto? Here are some things to know before you make the move.

The average cost of living in Toronto is higher than just about any other city in Canada, but, that doesn't mean you need to live in downtown. There are many outlying hamlets, villages, and townships to choose from the dramatically decrease the cost of living from downtown. However, living in downtown will give you a lot of access to shops, restaurants, markets, fantastic entertainment venues, museums, art galleries, and more.

BPC name Toronto the most multicultural city in the world home to over 200 nationalities and an 8.4% immigrant population. So you know it's going to be diverse in culture, ethnicity, and culinary cuisine. Toronto has some of the coolest neighbourhoods in the world and there's typically one to suit just about any lifestyle from foodie destinations to arts and performing theater, sculpture, finance districts, high-rise condominiums, and complete micro-communities with everything you would want. There are more than 140 distinct neighbourhoods in Toronto alone.

People say that Toronto is one of the best cities they've ever visited and it was ranked the fourth most livable city in the world by Economist Intelligence Unit. Livable in the fact that it has such a vibrant culture, great healthcare system, economic stability, massive education sources, environment, and stable infrastructure. Some people call it the city that never sleeps so regardless of whether it's 11 AM or 2 AM, you'll find fantastic events in a world that's always surprising.

Did you know that there are over 140 languages spoken in Toronto alone? This is not just a French-speaking city. English is the most commonly used language and 55% of people noted English as their native tongue and 43% said that their native tongue was neither English nor French.

Public transportation? It's reliable and there are dozens of opportunities and options from subways and streetcars to fairies, taxis, bike-sharing programs and buses. Toronto has also been touted as one of the safest cities in North America.

Did you know that there are 1600 parks in the city? Even among all the condominiums and skyscrapers, there are hundreds of kilometers of trails for running, jogging, walking and cycling.

The average home price in Toronto is $1.4 million, which tends to increase anywhere from 5% to 20% each year depending on the area. At any given time there are roughly 3000 listings for sale throughout Toronto with an average price range of $45,000 for a studio apartment up to four or $500,000 for a single-family home, and at the top around $12 million for high-rise luxury penthouse condominiums and waterfront estates and mansions.

For more information on homes for sale in Toronto Ontario or all Toronto condos for sale, feel free to browse through all the available and active listings above. For a more personalized list of properties that meet your search criteria and price, contact us at any time by filling out the form below or simply giving us a call. We'd love to be your Toronto real estate agent helping you find your way home.

Have a Question or Want a Free Market Report?

Contact Us
Questions? We're Here to Help
Recently From Our Blog

Is Getting a Home Mortgage Still Too Difficult?

Why You Should Consider Selling Your Toronto Home in the Winter

Have a Question or Want a Free Market Report?